I am eating some phenomenal Indian and Mediterranean food in London! I will update later in full detail but for now here are some photos.

And lastly, from our dinner last night. The puff pastries were like deconstructed samosas. They were soooooo good. The little squares next to them are chickpea cakes – they reminded me of cornbread but the chickpea cakes had way more flavor and a less gritty texture. Really tasty.

Then some rice with tomatoes and spices. And the soup like thing was a Chinese inspired dish – I tasted black beans and Sezchuan with Tamarind and maybe paprika… which was really weird to me. 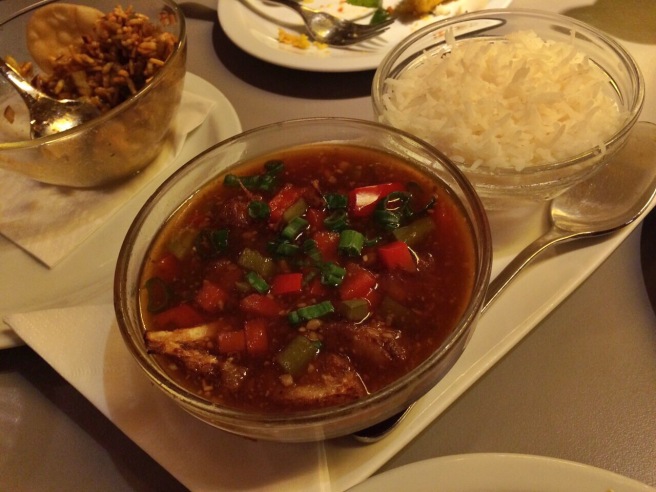 Curry chick peas (sorry for the messy plate). And not pictured is a Chinese stir fry of vegetables. Again, another Chinese inspired Indian dish. So. Weird. 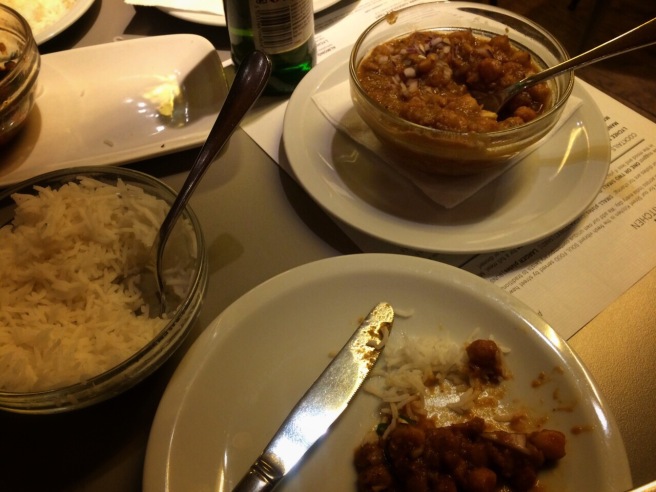 Anyway. I would post photos of the nightlife but I doubt they would be interesting.

As you can tell, I am having a blast in London with the most excellent company 🙂

After a 12.5 hour flight. Taxiing on the tarmac for almost two hours and another two hours to clear immigration I finally got to see some parts of London. Was so exhausted so last night was pretty low key.

Slow start to Day Two but I am already in love with this great city.

This city is so charming. Reminds me of the West Village in NY. Can’t wait to see more! 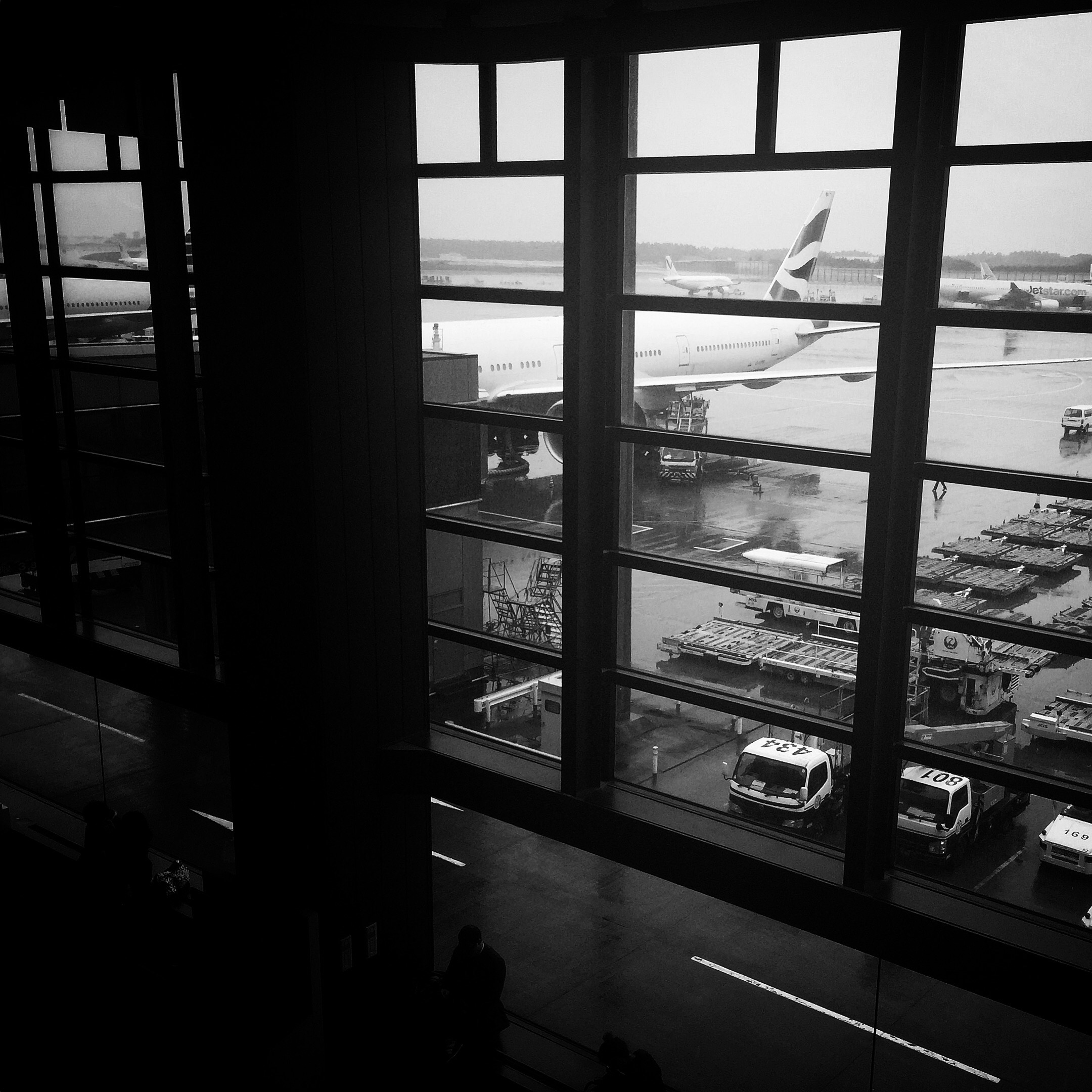 Daily Tsukiji is taking a break as I am out of town for a week or so. Apologies.

I already miss The Market!

Stay tuned for food posts from my destination.

Googling how to reset my memory so I can enjoy places other than Shutoku did no good. I came across useless articles about how to get over someone who cheated on you. Or like, how to forget that one unforgettable guy/girl. I tried replacing ‘guy’ with ‘food’, but it didn’t work out too well. Actually it was very strange. (I’ll spare the details.) So I did the next best thing: go to another place that serves akazu vinegar rice sushi. Akazu, is the five year brewed vinegar.

Since I forgot to take a photo of the buri belly from last week, I went back to the same place that serves seared sushi and ordered three pieces of seared (Aburi) omakase and four pieces of non-seared omakase. With the stipulation the buri belly be included.

Customizing orders can be challenging here as the menu items are all in Japanese (except the set menus.)

The last piece was a chu-toro. Didn’t even compare to the one I had at Shutoku.

I’m not being biased, but, at the same price I can have a way better meal at Shutoku. Probably not returning here again. Sadly.

I have a colossal problem.

Today I had a lunch at my scheduled place. I just… couldn’t enjoy my meal. I didn’t even take photos. Shutoku has basically ruined me; I can’t stop day dreaming about my experience there.

Every piece I eat, I’m comparing Aoki Chef’s knife skills to others. I wonder how he would garnish that particular piece – or if he would even garnish. Would he just sprinkle salt? Brush lightly with soy sauce? Or maybe top it with grated daikon radish. I stare down at the cut fish on top of rice and imagine how he would present it. My taste buds are craving the perfect balance of akazu vinegar rice with the freshest, highest quality fish. And I wonder what Aoki Chef would say, as he served the piece to me. He has set the bar and Shutoku is now hands down, my favorite place in The Market thus far.

How am I ever going to eat through the other places in Tsukiji?

I get that this is a good (spoiled?) problem to have. But I need to figure out a way to reset this meal so I quit complaining and give accolades to other establishments.

After all, every place is different.
Off to googling I go…

It’s 7am and I’m already at the market. Mainly because I skipped Friday and Saturday and really missed the energy.

No photo as I’m just taking in the early AM sights and sounds but I just had to jot this down as I think about this a lot and keep forgetting to do so.

No matter day or time I am here, the market is always crowded. There are locals shopping. Merchants purveying. Tourists – both Japanese and non-Japanese – standing in line for Sushi Dai or Daiwa, crowding the stands and spilling out into the streets.

I mean. I know I’m one of the people contributing to the crowd but I really wonder what these people do for a living. Tourists I get, but the Japanese people. The Japanese are notorious for all having corporate 9 – 5s. Yet they are standing in line. For sushi! And Tsukiji goods! Who are they? And what do they do??

It’s a mystery, I tell you.

I once heard oden described as ‘fish marshmallows in soup’. That doesn’t really sound appetizing but it made me smile.

Oden is a traditional winter dish in Japan, that stews vegetables and fish cakes in dashi Japanese stock. As strange as ground fish meat made into patties translated to ‘fish cakes’ sound, if you eat ramen or udon, you’ve most likely had it in some form before:

Oden is usually eaten with Japanese hot mustard karashi and is Japanese comfort food at its finest. I love oden so much and since the description sounds a bit scary, I just tell people it’s ‘a Japanese delicacy’ in order to get them to try. I’ve yet to meet a single person who said they didn’t like it. It’s really, that good.

The other night I went to a very famous oden place in Ginza known only to Japanese people. The owner and operator Tanaka-san, has been cooking oden for over 50 years.

And boy, was it delicious.
END_OF_DOCUMENT_TOKEN_TO_BE_REPLACED

There are days I don’t update and there are several reasons for that. Usually, it’s because the place I went to was a bummer… and it’s unbecoming to blast businesses so I choose to stay mum.

Also, yesterday (Saturday the 21st), I didn’t go to the market. Was out until 6am on Friday (for shame) and couldn’t get out of bed… This used to be my lifestyle before, but now, I’m so angry with myself for ruining a day! Most likely won’t happen again as long as I’m continuing Daily Tsukiji.

Just throwing that out there. But more so, for myself. So I don’t repeat the same mistake again…

But it was worth it. I ended up at some Magic Show in Ginza at 3 am. So random. So Tokyo!

Shame on me for failing to immediately post these photos but I’m still processing the stunning omakase from Tuesday. (Today is Friday by the way.)

Every now and again, I have an unforgettable meal I can’t stop thinking about for days on end. My lunch at Shutoku 秀徳 was definitely one of them. I’m terribly concerned my photos and words won’t do this place justice…

The citrus pictures is sudachi. Not pictured is kabosu. These two citruses are mainly used outside of Tokyo and in Tokyo when yuzu isn’t in season. Osaka, uses sudachi year round. Only a few sprinkles from the grated rinds releases an unbelievable, delicate citrus aroma.

END_OF_DOCUMENT_TOKEN_TO_BE_REPLACED

Sandwiched between inarguably the two most famous sushi spots in the market: Sushi Dai and Sushi Daiwa, is a teensy run down place named Yachiyo. There are two counters lining the wall and six shabby stools crammed side by side in front of the counter. The space is so narrow, only one person can walk through at a time. The interior looks as though it hasn’t been updated for decades.

Yachiyo was originally one of the go-to breakfast and lunch places for the Tsukiji workers. As tourism increased at Tsukiji, so did the customer base for this tiny spot and now, there is easily a two hour wait for their food.

I heard about this place from the people who work at the market. As keen as I am to get to know the market, I’m super interested in what and where the people of the market eat. They have been around for tens of years, why wouldn’t I ask?

Several people mentioned there is a shokudo (diner is the closest translation) that serves a three day stewed pork char siu with onsen tamago (Japanese poached eggs) only on Tuesdays, Thursdays and Saturdays. And that’s how Yachio became one of my priority non sushi spots.

They were originally a tonkatsu (deep fried pork cutlet) specialist but expanded their menu and now also serve out of this world deep fried seafoods, as seasonal fish, shrimps, scallop and oysters. I’m not sure when they started the char siu and I didn’t have a chance to ask as no one talks and shovels the food down as fast as they can because there is such a long line outside.

See? The line is almost as bad as the next door neighbor, Sushi Dai. 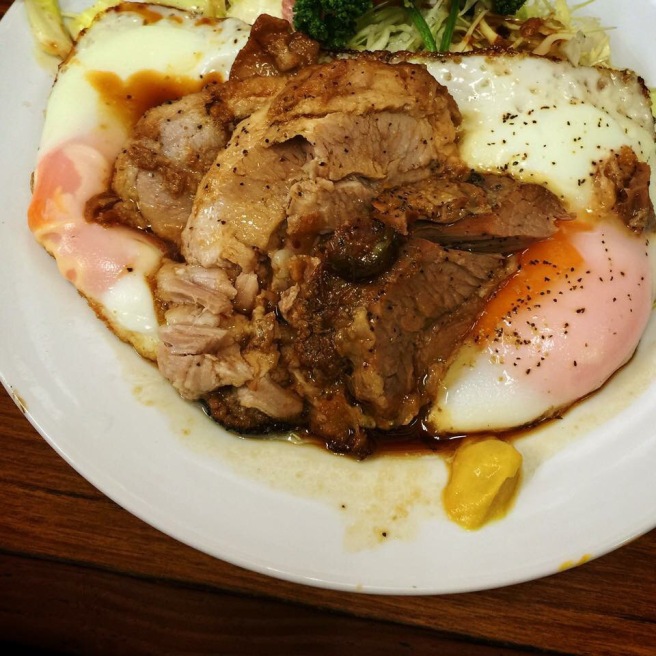 I ordered the char siu egg of course. But 1. since Yachiyo started out serving deep fried foods and 2. I wasn’t sure if I wanted to stand in line for another two hours again (well fine. I’m just a pig) I treated myself to a side order of Kuruma Ebi (Japanese Tiger prawns).

And I polished off both.

When I first sat down, I got in trouble for taking photos. I couldn’t help myself. There were cauldron like pots and aged pans that look as though they’ve been used so much, anything cooked in them would come out delicious. Four people man the kitchen and I want to say it’s family run but I don’t know for sure. The head honcho is this super old, super cute chef and I just had to take a photo.

Especially, since Yachiyo is going to move, I wanted to capture and document the essence of the kitchen, its character and all the things I can only begin to imagine they have seen from that charming cubby hole. 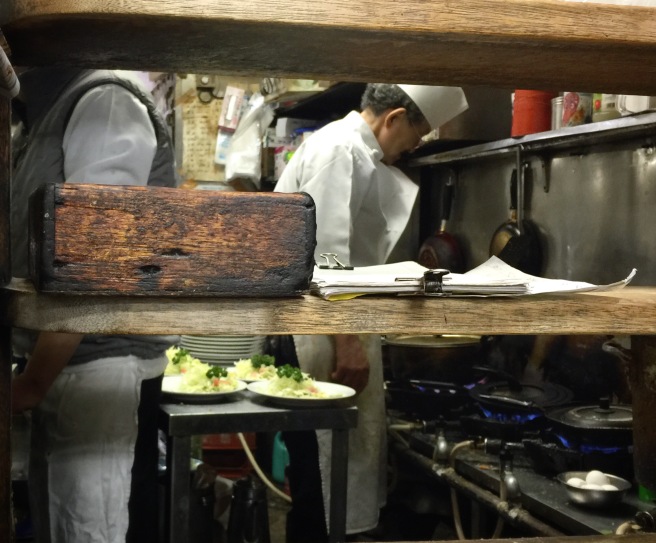 After I ate two servings, the people at Yachiyo laughed at me. As I was leaving, the old man even took his chef hat off, bowed, thanked me for my patronage and said he was so happy I enjoyed my lunch. My heart basically melted.

I don’t care if i have to stand in line again. I am definitely going back until they know my name. And once a rapport is built, I hope to hear stories from them I can right now, only imagine.

God I love everything about Tsukiji.

Yachiyo 八千代
In the inner market between Sushi Dai and Daiwa.
Sorry there’s no map. The government only printed one for the outer market. Just look for the characters.

In case you’re wondering the char siu was out of control. The pork melted and combined with the creamy egg yolk, there were unspeakable things going on in my mouth at one time.

Just as a side-note, I only left the tail (meaning yes, I even ate the head) and of course the people at Yachiyo noticed. As of late, the younger generation of Japanese who leave the heads are increasing — which is okay, but people who do eat the head show they have a different outlook and respect for food. Which in turn, earns respect from the people preparing and serving our foods.