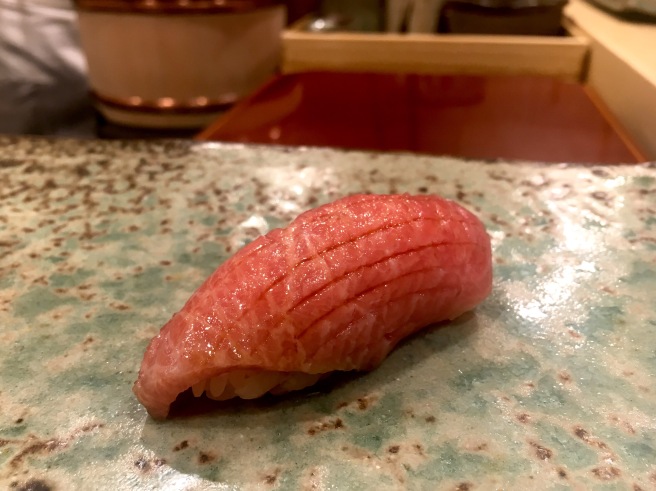 Almost a year has gone by since I ate my way through Tsukiji and it’s time to update — especially since revisiting some older posts, my face turned hot and red; I am extremely embarrassed at how little I knew about sushi.

So today, almost 12 months and many, many high-end sushi meals later, here are a few things I have learned. Warning: this will be a super long and ultra nerdy post with barely any photos…

Sushi is not about the ‘freshest’ fish

The freshest sushi is the best quality sushi, is a fallacy a lot have come to believe as the truth. Myself included.

The root of this myth, is ingredients. Japan is topographically blessed and our country — land and sea — have some of the best natural conditions to grow the best vegetables, raise the tastiest farm animals, catch the best fish. Farmers, fishermen, etc. have an ethos that starts with the essence of being Japanese. We are taught to respect any living thing and to thank and appreciate when they are sacrificed to give us nourishment. (If you ever wonder why the Japanese say ‘itadakimasu’ or ‘gochisousamadeshita’, it’s for the purpose of giving thanks before and after the meal.)  This type of thinking comes from our Shinto roots and still lives on to this day. The philosophy is ingrained in our culture, applied every step of the way when cultivating food from when the seeds are planted or the moment of birth of our livestock until they reach the table. This includes growing, nurturing, slaughter, packing, transporting, cooking.

Fish, crustaceans, sea life (plants, kelp, etc.) live privileged lives in our oceans and bays, rivers and peninsulas with optimal warm and cold waters that flow up, down and around our country. (If you want to learn more about why we are topographically blessed, I’m happy to discuss over champagne —  you’re treat, of course.) All things from the ocean are also treated with the same love and respect as vegetables, plants and livestock — you will never see a fisherman yank a hook out of a fish’s mouth and carelessly toss it into a crate to be transported to the fish markets. Same care applies to konbu, too. Which is why every part of a konbu can be used (the roots, have the most concentrated flavors and usually cut off high-grade konbu and used specifically for making dashi.)

We live in a nation where ‘organic’ or ‘local’ and ‘farm to table’, ‘cruelty free’ and ‘free range’ are the norm.

When my parents first immigrated to the U.S., in the 80’s, the nation was very far behind in respect to food. Cooking and chefs were not glamorous jobs, Food Network was non-existent. Produce and meat were optimized based on saving costs: how can we manufacture the most at the cheapest prices and maximum profit. This thinking and methodology dramatically shifted over 30 years to now, in 2016, Americans are highly attune to quality but, back when I was growing up, the ingredients we can buy at Whole Foods or local gourmet grocery stores and artisan boutiques, farmer’s markets (now the norm in many metro cities) were unavailable. Which is why my parents always focused on ‘freshness’, especially towards seafood and sushi.

So imagine eating sushi in a time when 1. not just Japanese ingredients but most non-American ingredients were rare and 2. overall quality of ingredients were poor, it’s understandable why people (myself included) would assume freshest fish = high-end sushi. In case you’re wondering, my parents weren’t really into sushi — my father would only pay a lot for meat (typical palate of a war-time child) and my mother was into French and Italian (typical Japanese female). We ate sushi but they never, ever took me to any high-end sushi restaurants when we visited Japan (assholes).

Sushi’s history can be traced back to the 8th Century in Japan. I don’t even know what the 8th Century is in years and the roots of sushi are fascinating but not worth regurgitating since the Wikip entry is pretty legit so I’m going to skip it. But if you’re curious, here is the link to the Wikipedia page: click this #yourewelcome

Long story short, sushi is peasant food and the earliest forms of sushi was simply a way to preserve foods. We were generally a poor nation and in order to ration when refrigeration was non-existent, tons of amazing preserved, pickled and fermented foods were born: miso, soy sauce, himono, tsukudani, tsukemono, etc., etc., Sushi is only one of those by-products.

Knowing the gist of the history, makes it easier to see how a sushi chef’s true skill is displayed in the curing of fresh fish. At Tsukiji, for example, the selling point is “freshness”, so preservation techniques are rarely flexed in the sushi restaurants of the market — that’s what the sushi restaurants in Ginza (a close proximity to the market) and the master sushi chefs in and around Tokyo are for… to hone their skills mastering their take on ‘the perfect sushi’.

This is the reason the ‘freshest’ fish does not automatically equate to ‘best’sushi. (Of course there are exceptions like uni, some shell fish like hokkigai, and ika… which is why a lot of these nigiri are pricy to this day, even if tuna may be more expensive to purchase in markets, Japanese are raised to know: uni = luxury.)

Personal, because personal preference comes into play with sushi. One person may like one place, while another may not as there are many, many, considerations with sushi – especially, high-end sushi.

The tastes of the rice shari ranges from pungent to barely vinegared (is vinegared even a word? Oh, well. I just made it one). Acidity levels of rice are dependent on how the chef cures his fish and the tastes of shari range wide. Then, there is the temperature. Some like warm shari, others like room temperature while some may prefer cold. Texture, too, has no one standard and can be chewy to almost al dente with a bite.

The fish neta and garnishes casts the net of preference even wider, as there are so many ways the final piece of sushi is put together. From the selection of the fish the chefs/restaurants are privy to, to curing techniques, garnishes, to even the type of condiments the chefs choose to cook with, every chef has their own style, method and palate.

A good example is Saito. Saito-san’s sushi is my absolute favorite but some may find Saito-san’s sushi ‘boring’ or ‘safe’. But the consistency of his flavors, is a menu that I can eat every day and not tire of. His sushi is excellent (cuts, selection, rice, rice temperature, etc.) but to someone who prefers, for example, pungent fish, I can easily see why they would consider his sushi a snore.

The translation of otsumami is loose word play based on the word tsumami (grab = tsumamu). The closest English translation would be ‘small bites’ (like a cheese puff served with an apertif) but otsumami is more like bar snacks ex: nuts, crisps, tortilla chips, etc. — not enough in one serving to be an appetizer and gone in two to three bites.

In the higher end sushi restaurants, the chefs show skills beyond sushi to kick the meal off with these seasonal small plates. Otsumami, by the way, is when staples in the US like ikura, ankimo and, ‘exotic’ fish such as shirako, kobashira, shako, hotaru ika, aka mutsu (nodoguro), et. al., make appearances at the ‘Ginza’ sushi restaurants.

Otsumami, is high up on my priority list. I prefer sushi restaurants that serve mind-blowing otsumami such as this ↓

Aji sashimi with the Saito ‘pesto‘, sesame seeds and egg yolk. So creamy and flavorful but so light it doesn’t disrupt the meal, this was one mind blowing dish.

My absolute favorite: aka mutsu a.k.a nodoguro a.k.a. black throat sea perch (?). This fish is available year round in Japan. It’s a nondescript white fish (like a snapper) but so juicy, flavourful and packed with wonderful natural fats. The dish looks watery but that’s actually the juice from the fish’s ample oils which are not greasy in the least. I usually eat this dish without the daikonoroshi (little white mound is actually grated daikon) then eat the daikonroshi with the fish’s oil. It’s spectacular.

After eating through a lot of the top sushi restaurants in Tokyo, I’ve settled on two repeats: Saito (I cannot get bookings so please do not ask. I beg regulars to let me to tag along #noshame) and the other, I prefer to keep a secret a little while longer. His sushi is not the best but I enjoy his meals the most. His ajitsuke (prep and seasoning) is extraordinary and we have a great rapport. I am also a huge fan of the cadence of his menus — he knows what and how to serve food in a way that speaks to my senses. He started at Kanesaka then apprenticed at Saito, opened his own restaurant at age 27 backed by the Kanesaka Group. He is young, talented with a palate and intuition towards food that is really something special. Sometimes I wonder if he missed his true calling as a kaiseki chef. The above photos are from his place. I go at least three times a month and I still don’t tire of his food.

So you see, when people ask me for sushi recommendations, I can not just name names as sushi is very, very, personal. But what I can suggest is: for first time visitors interested in learning about sushi in Japan, I say take a crash course down the path I took — start off at Tsukiji, let your senses be over loaded. Eat all the fresh stuff. Gawk at the weird. Be overwhelmed by the market. Load up on as much as you can eat in and around the market.

Then, let the stunning high-end sushi intoxicate you. Book lunch at as many places as you can to indulge but at the same time, learn about the overwhelming wonder that is sushi.

If you are simply interested in eating high-end sushi, the best round-up is here — it’s a fair assessment of the ‘famous’ places and a great read!