To raise awareness about climate change, Kyubey Ginza and a Japanese bio health firm Euglena teamed up for a campaign: The Last Day of Sushi (well, the direct translation is the day sushi disappears) and it kinda made me depressed.

Along with top researchers, they calculated the last days select neta can be served. Kyubey opened advanced reservations to book the last day you can eat x.

Here is a partial list of the neta and the last years they can be served that they published:

There is an English version of the site (run through Google Translate so the descriptions may be weird lololol) which goes a little more into detail about their research, impact, etc., and they’re also doing a Twitter campaign. First prize is a 30,000 yen voucher for Kyubey.

Someone randomly liked a super old post on Instagram which prompted a bit of reminiscing. I then realized, I only IG’d most of my posts and never really blogged about my sushi experience in Tokyo… which is a shame because I spent way more than I care to admit eating high-end sushi two to three times a week for about two and a half years, and now know more about sushi than a normal person should know. So I thought, why not write an ode (better late than never, right?)

After a year or so of consistently eating sushi, I finally felt confident to form informed opinions. Such as, which season to eat sushi is my favorite (neta fish used for sushi is hyper seasonal and you start picking up on patterns of what is served when), the various shari sushi rice from which chef and where (every chef uses their own recipe and flavoring techniques to complement their curation techniques… most chefs learn from where they apprenticed and usually put their own subtle touches) and I’ve also drawn the conclusion, my favorite sushi restaurant is Sushi Saito. My favorite piece of sushi is the simple red tuna. Or, akami, as we say in Japanese.

At first akami seems so boring and mundane but I didn’t understand the allure and depth until moving to Japan and experiencing the high-end sushi and for that, I am grateful.

So here is a gallery of Instagram posts of akami from Saito. Even before declaring akami is my favorite piece, reckon I subconsciously knew, as a lot of my posts from Saito are of the most mundane piece of red tuna on top of rice.

Read more about why I love Saito-san here. Really nerdy post on thoughts and learnings about sushi are here. Ranking of Tabelog’s top sushi spots are here though most of the top spots are near impossible to book.

I cannot stress this enough. Oyakodon at Toritō in the Inner Market of Tsukiji is a Tokyo must. For 160 years, they have been distributing chicken and duck across Japan, opened two spots inside Tsukiji a decade ago and have a strong loyal following. Toritō is the only place I’ve ever eaten oyakodon shio (親子丼塩), a version where the soy sauce is held back. The seasoning is so subtle, the sweetness of the yolk, the flavor of the chicken are prominent and the melty, creamy egg with the juicy chicken over a piping hot bowl of rice is so good it always makes me want cry. Chicken soup is mandatory – it’s the best chicken soup that’ll ever meet your mouth. 🐓🥚🐣🐥 Tokyo favorite!

…found this post in my drafts and decided to publish. RIP Tsukiji but don’t fret, Toritō is still operating.

As of late, I spend most of my time in Bangkok but I’m back in Tokyo for a quick trip and… it SNOWED.

The snow in Tokyo is exactly like this country: Soft, unobtrusive, calm, peaceful, beautiful. The tidying process is pretty efficient so there are barely inconveniences caused. At least in the areas I navigate (Ebisu, Aoyama, Shibuya, Roppongi) so it’s not a massive pain to get around and panic doesn’t break out like it did when I lived in NYC.

Here are some photos. 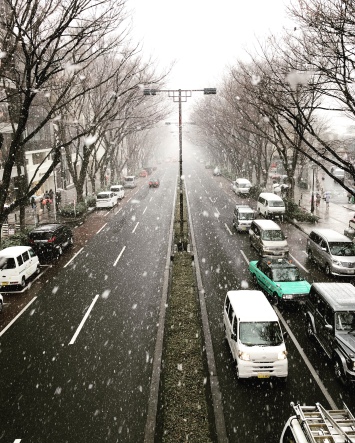 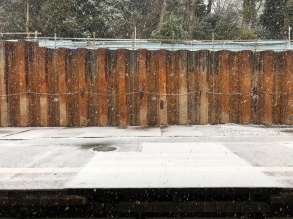 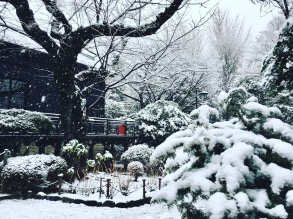 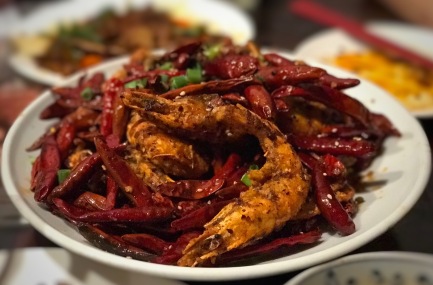 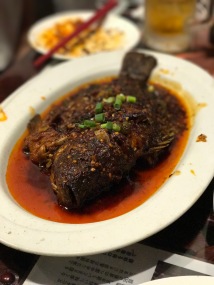 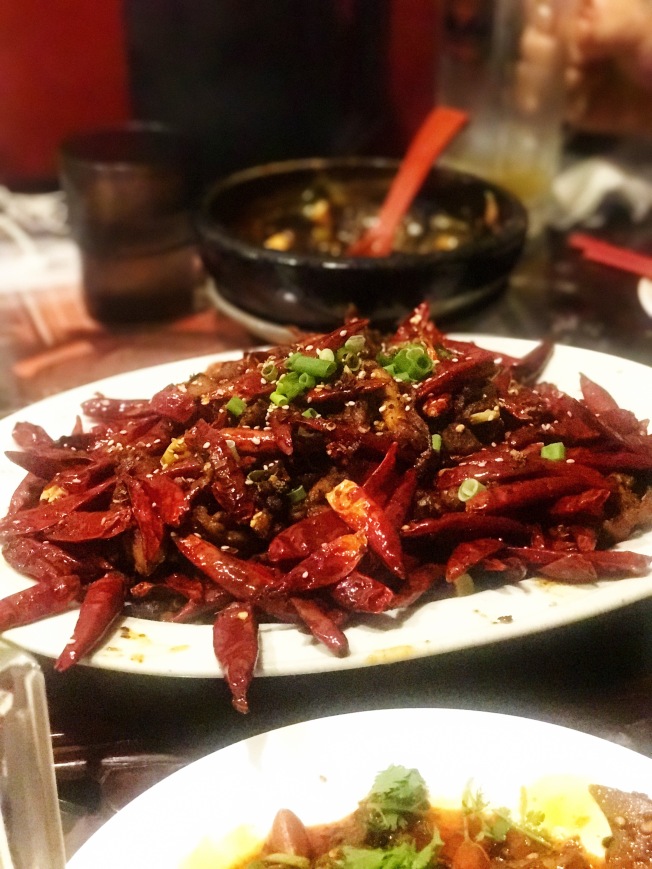 I rarely eat Chinese food by choice. Dim sum bores me (it feels like an endless on parade of tiny baskets with fish or pungent meats and chives wrapped in dough, cooked in different ways), black bean sauce is way too potent (can’t taste the ingredients). A lot of the fish has this slimy texture reminiscent to cheap catfish and a lot of the dishes — irregardless of style or region — tastes like the pan (or wok?).

XLB are my favorite but there’s only so many soup dumplings one could eat.

The other night I had Szechuan food for the first time in I can’t even recall how long ago and it was so delicious and flavorful. The dishes look extremely spicy because of the red peppers but the heat was subdued. There was one stewed chicken dish that literally blew my mind. I could taste every layer of the ingredients unfolding on my tongue — anise, sansho, soy, and I learned Szechuan peppers have this unmatched brightness, a subtle acid, that brings the dishes to a new level.

The chicken, fish, shrimp, beef, sansho peppers and all the greens are so optimal in Japan that it’s almost unfair. I swear, a cooked box of rocks in Japan would taste good.

Now I am keen on learning more about Chinese cuisines — especially Szechuan. Ahhhh the learning process here is never, ever, ending. 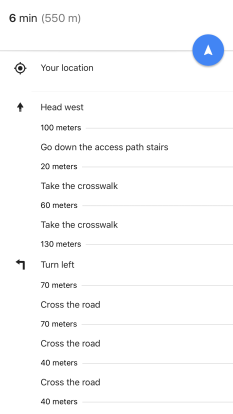 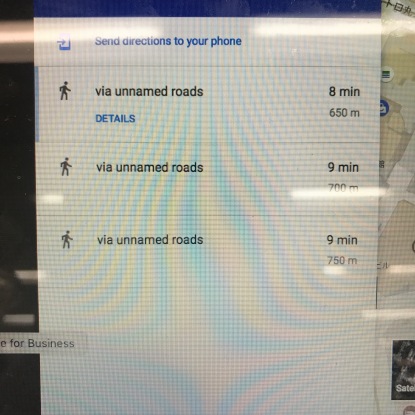 The other day I was just given an address for the spot we were going to for dinner. Looked up directions and got the most unhelpful navigation ever. “Unnamed roads” both on phone and computer in Tokyo (somewhere around Ginza/Akasaka-ish). The directions read like I’m in some farmland deep in the countryside!

I meannnnnnnn seriously?! JAPAN, YOU ARE RIDICULOUS!

In 2009, when Michelin decided to uncover Japan’s culinary scene by including us in their guide, two things happened. One: the world got a glimpse of our extraordinary cuisine. Two: it caused absolute chaos to the reservation situation in Tokyo.

There is way more demand than supply since most spots seat only 8-10 people and for those who aren’t Japanese or speak the language, they are SOL (shit outta luck). Sadly a lot of crappy tourists bail last minute or worse, don’t show up or even call (seriously, who does that?) and have ruined it for others to score bookings. Nowadays, a majority of the higher end and exclusive places are invite only for quality control. This isn’t because Japanese people don’t like foreigners. It’s because when a place is so small they only serve 20 or so seatings a night, it hurts the business a lot when people don’t show up; especially since ingredients are purchased daily.

But as frustrating as the booking situation is, one of the best parts about dining in Japan is the intimate experience. A lot of high-end sushi and kappo (cuisine with heavy kaiseki influence – thoughtful presentation, high quality, hyper seasonal ingredients, open kitchen, usually counter seating where diners get to watch/interact with the chef and his apprentices) spots, the taisho (chef) is extremely generous with his knowledge and every time I dine, I always learn something new.

This visit to Sushi Saito, here’s what I learned:

…I feel like I’m missing some learings so I’ll add if I remember.

Such a fulfilling meal both physically and mentally, which makes Sushi Saito one of my favorite places on the Earth.

A whooooole mess of latergrams of all the glorious gyoza in my Camera Roll. Some may or may not be taken at inappropriate hours

I really do eat too much gyoza. So much, I wrote 1,600ish words on gyoza in Tokyo. Do read if you’re interested. The piece is on Eater here. 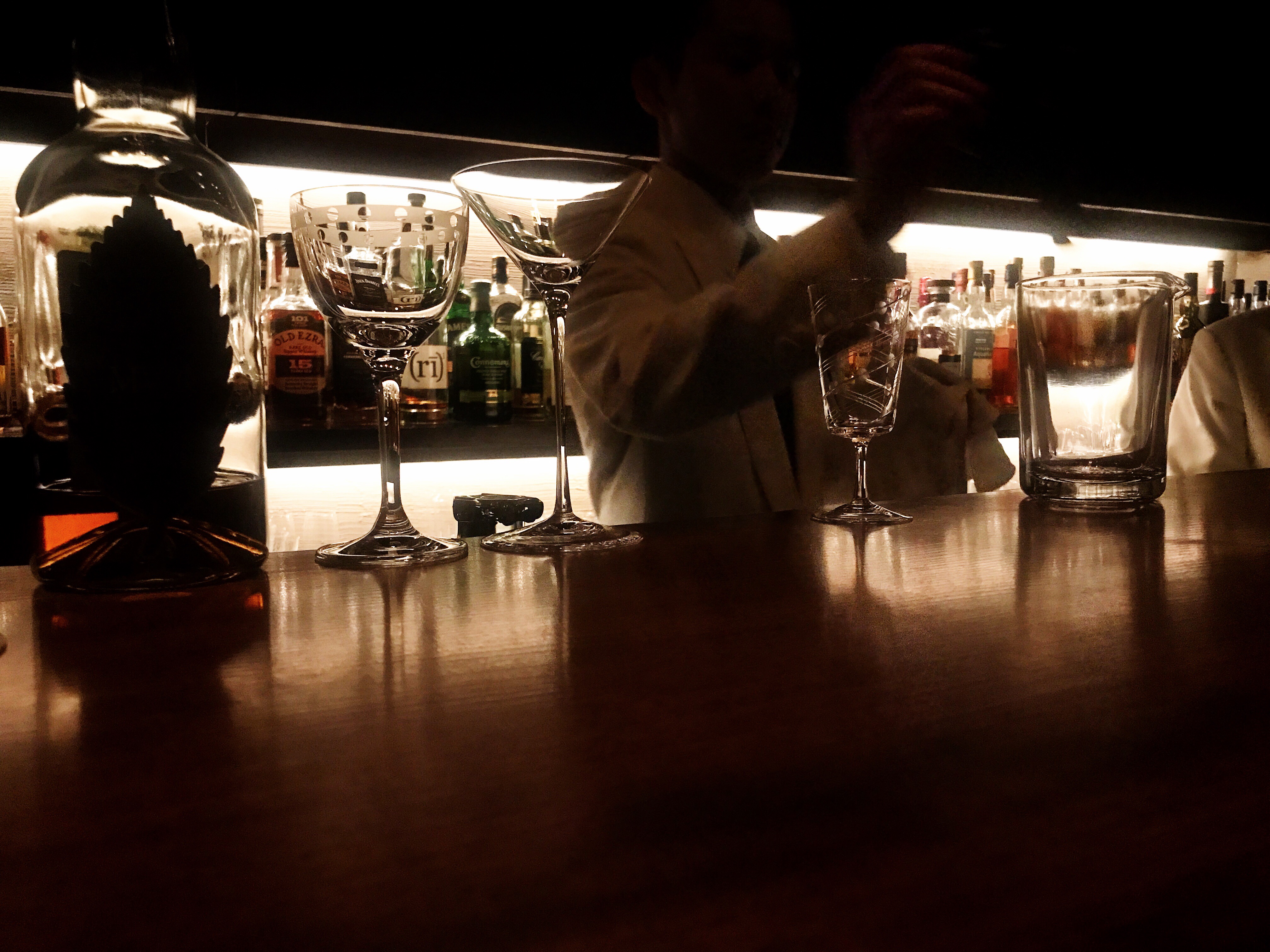 I get how people visiting Tokyo for the first time go through hell and back planning trips. I can also see why it’s hard to believe when I tell people: relax and just get… lost. But I promise, Tokyo is packed to the brim with good food, booze, and everything in between that all you have to do, is walk a few steps and BOOM. Anything you put in your mouth will taste better than whatever you last put in your mouths in your home countries.

Tokyo is so massive that even after living here for almost four years, I still stumble onto new places to eat and booze. If I don’t notate, I usually forget places I randomly find.

So if you’re planning a visit don’t be afraid to come without hours of research — Tokyo is one of the best places on the planet to wander without a plan. (Unless of course, you are looking to eat at all the Michelin spots).

And just for heck of it, here are some photos from another random bar — every piece of ice is chiseled to fit the specific glassware. So incredible! *pardon the laziness of uploading screenshots of my Insta; as of late, I don’t keep photos on my phone anymore… 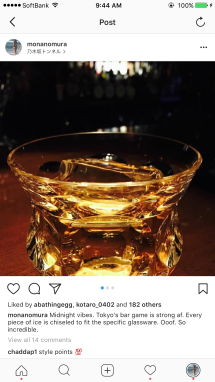 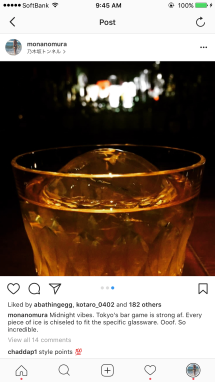 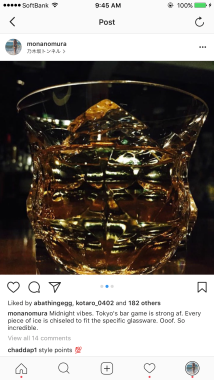 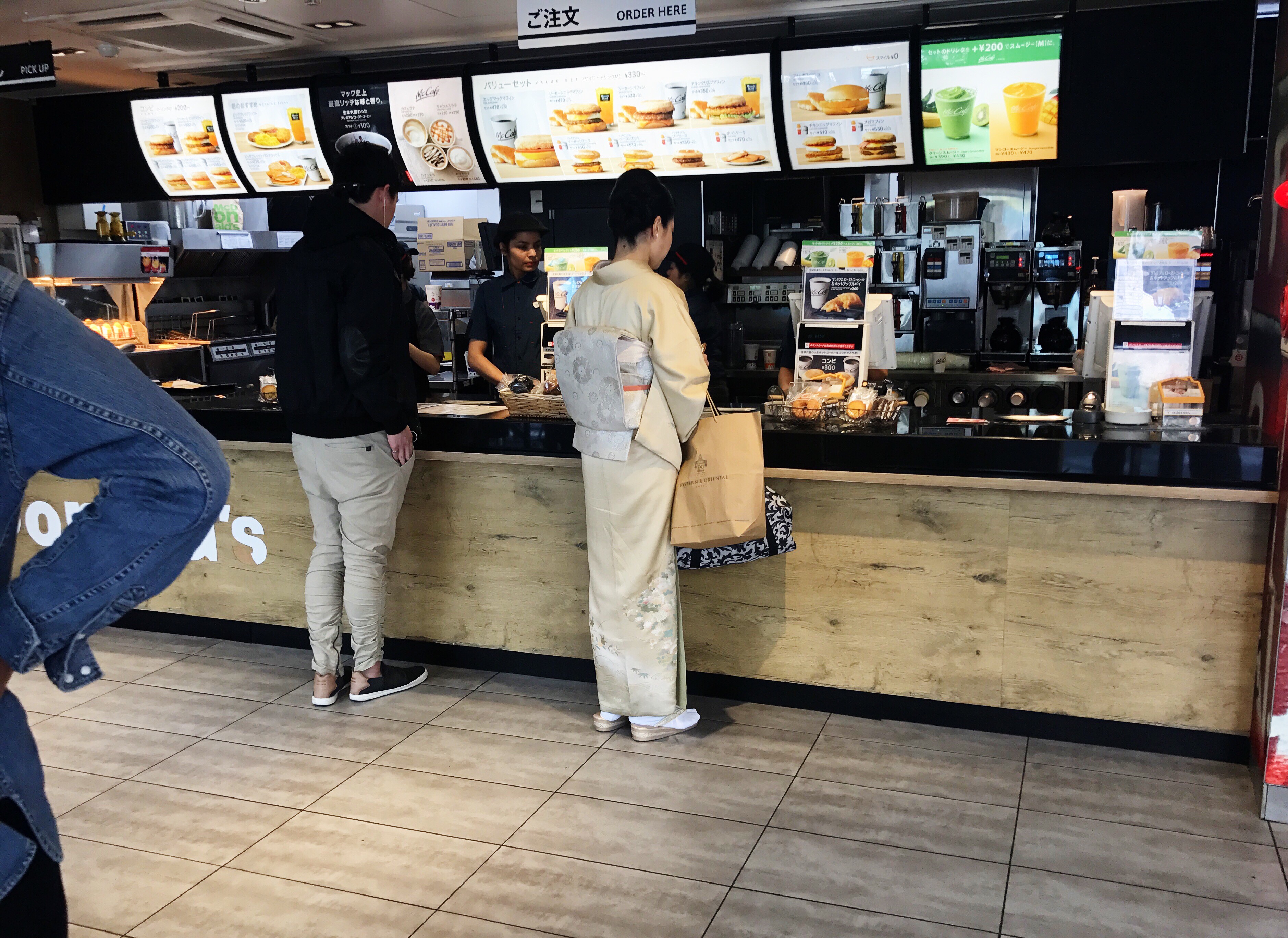 It may seem odd to write an ode about McDonald’s, since in America, McDonald’s are filthy (gross, really), smelly, and nicknamed as ‘homeless people food’. In Japan, that is not the case. The store fronts are super clean, the food comes out made to order and usually piping hot. Another neat thing about McDonald’s in Japan is how they have limited time offer items so there is a new burger, new flurry, new pie, etc., If you do a quick Google search, you’ll find all these burgers and such that are basically non-existent in other parts of the world.

The McDonald’s here is so normal there are even people who wear super duper expensive kimonos and order McDonald’s like it’s no big deal. Only in Japan, I swear.

McDonald’s Japan is also one of, if not the last McDonald’s on the planet that still uses beef fat to deep fry the fries, hashbrowns, and pies. And the craziest part is how the oil isn’t smelly so everything actually, well, tastes pretty good.

My biggest addiction are the breakfast sandwiches and I am not even going to lie, I eat there at least once every two weeks.

If you’re ever in Japan, don’t turn your nose up on the McDonald’s here. Seriously, it’s worth trying.

I will leave you with one of my favorite breakfast sandwiches: the Mega Muffin (two sausage patties, bacon, egg, between McMuffins). SO. GOOD. 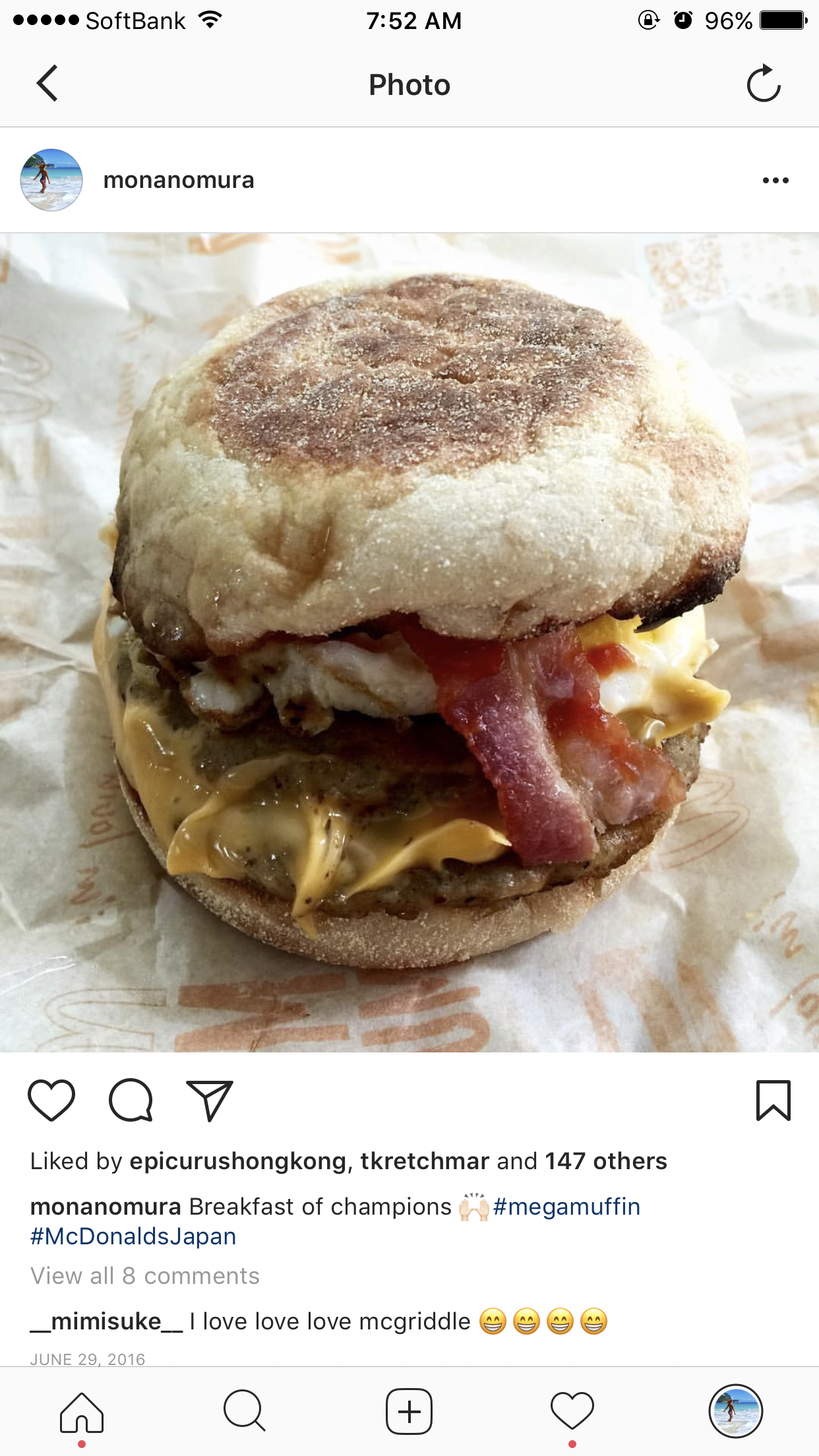